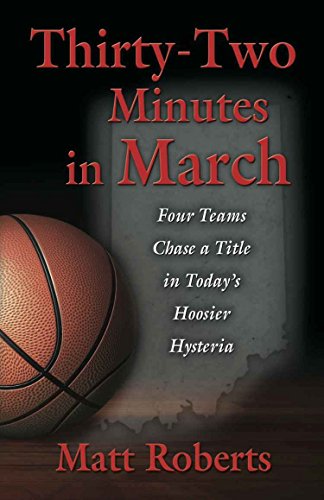 In 1911, Crawfordsville High School won the first Indiana state boys’ basketball championship. Since that time, movies, books, and popular culture have romanticized Hoosier Hysteria as the consummate high school experience. But most of these versions are trapped in a time loop that ends in the early 1960s. (What was John Wooden’s Twitter handle, anyway?)

Thirty-Two Minutes in March provides an updated examination of the game that enthralls the Hoosier state each winter. The book explores the effects of social media, the changing educational system, officiating, and summer basketball leagues through the lens of a single season.

Legendary Crispus Attucks High School carries the weight of history from their Oscar-Robertson-led championships from the 1950s, but is now a medical magnet school. Led by fiery, young coach Phil Washington, the team battles both injuries and sub-standard facilities in trying to return the urban basketball program to its former glory.

Long-time coach Brian Barber leads exurban Danville High School and has suffered only one losing season at the 3A level. In 2015, Barber has one of his best shots at the Indiana High School tournament promised land. But are his skilled, athletic players tough enough?

Center Grove's Zach Hahn is three years removed from competing at Butler University and coaches for the first time at one of the state’s largest schools. Hahn has been a winner his entire career, including a state championship at New Castle, Indiana and playing in two NCAA championship games. In his first season, he’s thrust into the cauldron of Indiana big-school basketball with a foundering program in suburban Indianapolis.

All four teams enter the season with one goal: to play in the title game of the premier state high school basketball tournament in the country. To play for Thirty-Two Minutes in March.